Steel for cranes, booms and other lifting equipment

Reach farther and higher with high-strength steel from SSAB

With expertise in high-strength steel design and manufacture plus decades of experience delivering to the lifting sector, SSAB can help your lifting applications cut weight without compromising strength or safety, lower fuel consumption, and reach higher. A higher strength-to-weight ratio means better payload as well as savings in material costs and construction schedules due to less welding.

Mobile cranes are just one of the many types of lifting devices where the complete Strenx product portfolio can be used to create strong, safe equipment.
Related products

Loader cranes can be designed lighter using Strenx steels in order to save on fuel costs.
Related products

Lifting devices that carry heavy loads need great strength and thicknesses in order to withstand all the stresses.
Related products

In rough climates and desolate locations, your cranes have got to be reliable. Quality material is a key issue for offshore cranes.
Related products

Contact Tech Support or Sales to discuss how we can help solve your particular challenges.
Bezárás

Most of the stresses when making the lift go through the appliances, such as tension bars, spreaders and hooks.
Related products

Contact Tech Support or Sales to discuss how we can help solve your particular challenges.
Bezárás

Lift your business with Strenx® steel

Strenx® aims to set a new standard in high-strength, high-performance steel. Specially manufactured for customers who expect the best in terms of performance, quality and strength, it meets the needs of the lifting sector for strong and safe yet light and sustainable structures.
Read article

Achieve higher payload and performance with lighter yet stronger steel in your lifting equipment.
Read article

My Inner Strenx® is a members-only program that allows approved manufacturers to place the My Inner Strenx® trademark sign on their products. A powerful marketing tool for OEMs, it’s also a way for end users to identify producers and products made with superior steel and quality-controlled production techniques for demanding applications. Find out more about the My Inner Strenx® program or contact your local sales rep to join today.

At SSAB, we work relentlessly to improve production processes. As a result, we can guarantee both closer tolerances and improved workshop properties, and help our customers develop new and better products. In fact, SSAB was first in the world to introduce a precision guarantee on the thickness of our high-strength steel plates – the Strenx® guarantees. In 2014, Terex Cranes launched its new Terex® Boom Booster kit. It’s a godsend for customers who need to lift heavy items with long-boom configurations in the petrochemical, wind turbine and power plant industries. The benefit of the Boom Booster is that when it is fitted to the Terex CC 8800-1 crawler crane, it increases the crane’s lifting capacity by up to 90 percent, meaning it can “out-lift” any other crane in the 1,000 to 2,000 tonne capacity range currently on the market.

“The Boom Booster kit is simply added to the main boom of the crane,” explains Rüdiger Zollondz, Director of Product Marketing at Terex Cranes. “The wedge-shaped, 11-meter-long lower and upper adapters flare out to a width of ten meters, nearly three times the standard 3.5-meter boom width.”

“The Boom Booster kit enables customers to complete jobs they could not have done before,” Zollondz says.

Ensuring that the kit could lift heavier loads was just one part of the job. Terex Cranes also wanted to make sure that the Boom Booster was lightweight without compromising on safety. “Safety is top priority for us. So when developing a new product, we always take safety into consideration from day one,” adds Zollondz. “For example, the Boom Booster kit comes with the ESTA Award-winning fall protection system, which helps to prevent injuries and accidents when using the equipment.”

Strenx 700 high-strength steel from SSAB was used in the Terex Boom Booster. SSAB is no stranger to the crane industry’s needs and has been supplying Terex for almost 30 years with Strenx** high-strength steel plates with mechanical properties up to 1100 MPa used for the chassis of the crane and crane booms. Today, the plates used in crane production are far lighter and thinner than 30 years ago but offer the same performance and strength.

“In mid-2013, Terex told us they wanted hollow steel tubes with a clean surface. They were looking for a good quality material. It was also very important for them that we could offer them a finished material so they didn’t have to do any cutting themselves in-house and could save on the costs with this additional work,” elaborates Bednarz, who manages the Terex Cranes account.

The steel used in the Boom Booster is supplied from SSAB’s facilities in Finland. The hollow steel tube is made in the mill in Pulkkila in northern Finland and is then sent to Hyvinkää in southern Finland for cutting and drilling. From there the finished steel product is sent to Terex Cranes in Germany, ready to be used in the production of the Boom Booster, according to Marika Koski, Sales Manager for SSAB Tube Products in Germany.

“It was a big challenge for us as we had never done this kind of order before on this scale. Everyone in our mills was very happy to get this business,” she adds.

In September 2013, the first SSAB steel products for the Boom Booster were delivered to Terex Cranes.

“We also see some potential in using Strenx 1300 for boom application and Strenx 1100 for tension straps,” says Bednarz. “We currently use Strenx 960 but Strenx 1100 would be a cost saving for the customer as the tension straps would be thinner and lighter.” 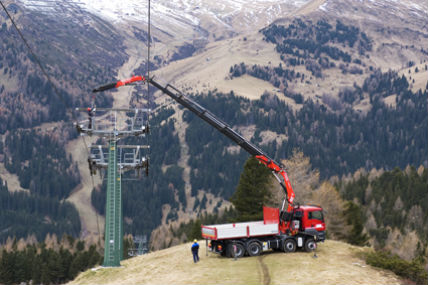 A user-friendly, stronger and lighter steel

Like all crane manufacturers, Effer is always looking for lighter and stronger materials. Weight is a major consideration when they develop a new model, especially for end users, since the cranes are installed on trucks. Effer needs to continuously develop lighter, stronger cranes to compete successfully in the crane market.

Effer had been using Strenx 1100 from SSAB. Although they were pleased with it, they really wanted a steel that was even stronger yet still retained all the characteristics that make Strenx easy to work with. They challenged SSAB to come up with a solution.

The project team from SSAB first sat down with the Effer product and design team to determine exactly what they wanted, and then it was back to Oxelösund, Sweden to start work on the steel. Although it took time to develop the steel, the SSAB project team knew right from the start exactly what Effer was looking for.

By 2005, the SSAB project team had developed a product they were happy to send for testing. Effer was just as pleased and started to design a new crane with Strenx 1300 once they had completed the tests.

Effer uses Strenx 1300 because it is the only type of steel that can take the strains put on its cranes while still being light and easy to bend and weld. Crane manufacturers constantly face the challenge of having to develop new sections in their designs that best utilize the properties of new products, and this is where SSAB can help.

”In my opinion, SSAB is one of only a few companies in the world that can give the sort of information we need in helping us develop new sections and using new materials properly. SSAB has helped us reach our objectives,” says the product marketing manager at Effer.

Along with Effer, 10 other companies are eagerly testing Strenx 1300 for use in their products.